Yesterday, I put in at a spot just downstream of the swim beach at the Oahe Downstream Recreation Area. I paddled with Indy to the entrance to the Tailrace and waited for John and Gary to catch up; they departed from the same spot later than I did. It was a beautiful day; not too warm but not cold either. Wind was calm. We paddled up to the tailrace structure and John went into the pipe a considerable distance. We ran into a little problem on our way back though. There is a point/pennisula between our departure spot and the tailrace. The water is always very fast there but in past years we have been able to go wide and get back upstream. The point combined with the dam running water made it near impossible to get wide enough. Garyended up pulling up on the point. John did make it, but he had to cross over to the opposite side of the river and stay over for a consiferable distance upstream beyond the point. I tried the same, but tried to cut back too soon and ended up pulling out on the point with Gary. I think I could have made it if I didn't have Indy and possibly had a longer boat. Or if I would have just stayed to the opposite shore. It was still fun though. Because of losing ground and fighting back near the point, my gps read something like 6 miles. I think (from google earth) it was more like 5 miles.

Posted by Patrick Wellner at 9:09 AM No comments:

I convinced John to go paddling yesterday. It was a beautiful day; temperature in the mid to upper 80s, light wind, and few clouds. We went into the interior of Farm Island. I also took along Indy, my new dog from the humane society. He is an australian shepard/blue heeler mix and is about 7 months old. He did alright on the water. As well as Scruffy did the first few times he went out. We ended up putting in about 4.9 miles. 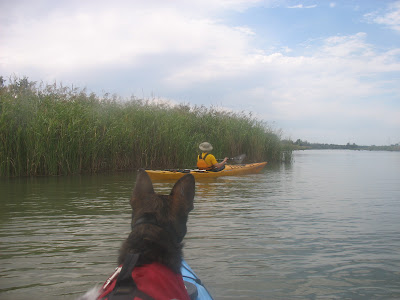 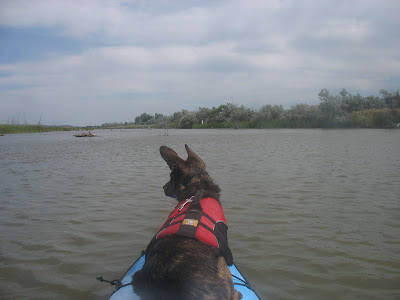 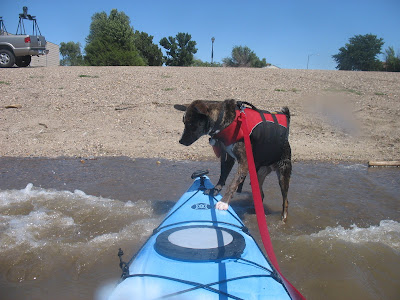 The last picture is from Saturday, when I took Indy out for only about a mile near the American Legion cabin.
Posted by Patrick Wellner at 5:40 AM No comments:

Last night, I helped take some Boy Scouts out canoeing. We paddled from the Oahe Marina down to the causeway. When we arrived at the marina, there were a few rain drops and some clouds in the distance. We thought we could make it to the causeway before any storms hit. We were right... timing is everything though. Maybe 10 minutes after arriving and while we were loading the canoes back on the trailer, it began to rain. After finishing loading, we convened to the nearby amphitheater to partake in cake and ice cream to celebrate the scoutmaster's birthday. Then the full storm hit. Torrential downpour, wicked wind, and even a little hail swept through. As with most SD storms it was short lived though. As with most excursions, I think the storm will make even this short trip memorable. Also, my gps read 5.88 miles, but that also inludes me doubling back to check on some scouts that fell behind. Slideshow of pictures below:
Posted by Patrick Wellner at 4:15 PM No comments:

Sorry, I haven't been posting much. I have been keeping my mileage updated though. And last weekend I didn't paddle at all. Instead I spent the weekend in St Paul for the MN Irish Fair. On Friday I met with Cory Diedrich (sp?) and paddled around La Framboise with Cory and his cousin or nephew (I don't recall which). Cory paddled my Carolina and I paddled Chuck's Temptest. I am actually storing the Temptest in my garage while Chuck's garage gets some concrete repair done to the walls. Nothing too spectacular, 5.7 miles.After the testing of my Carolina, Cory is planning on ordering one of his own! Yesterday, I paddled with Chuck and his girlfriend, Diana. Again we went around La Framboise Island, but with a slightly different route (we came through the main channel at the downstream end). We managed 6.4 miles. We even came upon Cory and his family enjoying the river in Griffin Park. 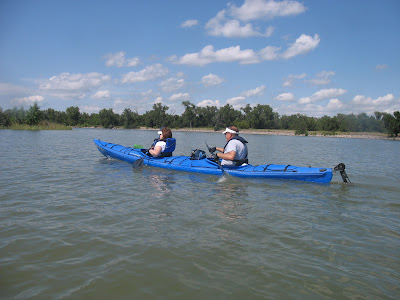 When Chuck and Diana pulled up to the causeway boat ramp, I heard bystanders say "Look at THAT!" and one even pulled out a camera... heh, a geo hauling around a 18', 90 lbs. kayak is a SIGHT!
Posted by Patrick Wellner at 11:54 AM No comments:

Today, John and I decided to paddle another stretch of Lake Oahe. I decided to borrow Chuck's 18' Temptest, so as I could get used to it in case I decide to enter the SD Kayak Challenge. John and I met at Peoria Flats and loaded my boat and gear into his Tracker. We then went up to Spring Creek. Spring Creek is the home of the relatively new deep water marina on Oahe. As John and I departed, a sail boat was also heading out into the lake.When I first hopped into the temptest, I thought, "Whoa, I can only fit one foot in!" But I then noticed that the foot braces were too short for me. The boat was fine to get into after adjusting the foot braces. Initially, we had a side wind causing us to fight to track straight. I also noticed my feet were feeling numb. After fiddling with the foot braces, I ended up setting them all the way forward (towards the bow). Between that and the wind dying down my feet felt fine. Fairly simple fix for a break-in cruise.As we approached Peoria Flats, there were numerous trees underwater and lots of fish near the surface. We enjoyed paddling through some of the groups of trees... though it is important to be careful. Even without a current, these trees could be strainers. Just a little wind pushing you into them could do it.We ended up covering 8.25 miles. Again, the Google Earth aerial photos are from when the water was low and show us paddling over land!
The Temptest made a difference... I can easily cruise at 3-4mph in my Carolina; In the Temptest I can easily cruise at 4-5mph. My biggest concern with the SD Kayak Challenge is the wind. Strong winds will make paddling on Oahe extremely difficult and night paddling would probably be out of the question (in the case of strong winds). Since the registration deadline is the Wednesday before the race, I might hold off on making my final decision until close to the deadline so I can see the weather forecasts.
Posted by Patrick Wellner at 7:04 PM No comments: