Hey, I forgot to mention something about yesterday's post. The fisherman were so thick that we had to put in off a rocky "beach" next to the causeway boat ramp. Because Chuck missed out on paddling yesterday and to "honor" him and his composite boats I have dubbed it "Chuck's Landing."
On to today! Well, I went out to unload my kayak this morning (I was too lazy last night) in anticipation of the snow tonight and tomorrow, but it was so nice this morning that I decided to try to get a short paddle in before the wind came up. Well, on my way to the causeway I realized that there was open water all around Bad Humor Island (Lewis and Clark's name for it is much better than La Framboise Island). I managed to paddle around the island and I was off the water a little after noon before the wind got too bad. From NOAA, it looks like the temperature was from 31 -42 and the winds were from 10 - 23 between 10AM and 12PM (I was on the water a little after 10:30AM). Trip totaled 5.7 miles. ...Oh and I have been out 6 times just in March (and 9 times on the year) compared to Chuck's 3 times on the year :)
Posted by Patrick Wellner at 1:07 PM 1 comment:

John and decided to go for a paddle today; Chuck couldn't make it. We decided to give the Bad River a try since it is now ice free. We ended up traveling the to the furthest point upstream I have ever been too; I was there once last spring too.We had some interesting sites too. We had a heron staying just ahead of us for a while.We even encountered the fabled Bad River Rapid (notice it is singular).
We ended up covering our longest stretch of 2009... 7.5 miles and I have made it out 5 times in the month of March. And the slideshow of all the pictures I took today.
Oh yeah, here is proof that I made it this far up the Bad River before.
Posted by Patrick Wellner at 7:53 PM No comments:

First Solo Cruise Of The Year

As the temperatures rise, I have been getting braver and braver about when I am willing to go out paddling. Today, the temp. hit just above 70, but the wind was blowing around 15-16 mph with gusts over 20 mph. Chuck bowed out, citing the wind and John had spring cleaning on his RV. I really wanted to go out though so I started scouting the open water/white cap situation. When I went out to Farm Island to check the the polo fields boat ramp, I stopped at John's campsite and chatted with him and Cathy for a bit... tried unsuccessfully to talk him into going out too. I ended up putting in by the polo fields, where the ramp is protected from the wind by a small island. I intially just paddled around the protected area, but I did end up going out and playing in the rougher water too. I only spent half an hour on the water. The water actually didn't feel all that cold and the wind was warm (SE). Some pictures from the afternoon... note the captions.
Posted by Patrick Wellner at 7:25 PM No comments:

As I pointed out to John and Chuck earlier, I paddled once in January, twice in February, and today I made it three times for March. John informed me that I could not go out in March again. But if the temperatures hold, the pattern WILL break. Today, John and I met at the causeway at 2:30 and paddled upstream past the edge of town and just beyond an island that sits upstream of the bridges. The dam must have been releasing water because the return trip was much quicker. We did notice a 10 degree drop in temperature alongside the aforementioned island. Otherwise, not too much to mention. Steamboat park, alongside the river, seemed to be quite bustling during the afternoon. It is looking spring is here now!
A few pics...
Posted by Patrick Wellner at 8:26 PM No comments:

The weather gods sure have been fickle lately. The forecast for Friday was mid 40s but John and I were lucky to have 30 degrees. This weekend was forecast to be much colder and snowing, but today was sunny and the high was 53 according to NOAA. John and I met at the causeway at 2:30 PM and began to paddle down stream along La Framboise Island. On the return trip we came across Chuck, who couldn't make it at 2:30 PM. We then all headed back to the causeway. John and I had about 4.5 miles and Chuck was close to 1.5 miles. Some pictures below.
Boarding Party: 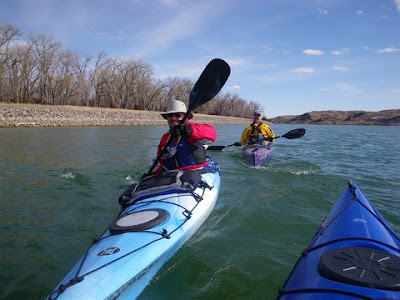 Posted by Patrick Wellner at 6:40 PM No comments:

Well, I wanted to get out paddling on Wednesday when the temperature broke 50 degrees and the wind was miniscule, but neither John nor Chuck were game. I couldn't make it out on Thursday due to a seminar at work. But as of Thursday, today was supposed to reach the mid 40s, so John and I planned to take time off to go paddling. As the morning progressed and the temperature held around 32 degrees I was getting worried. But John and I, being the hardy South Dakotan's that we are, chose to go out anyway. Besides, this weekend is only going to be worse weatherwise. We met at 2:30 at the causeway and as we prepared to launch, John checked the temperature and it had DROPPED 2 DEGREES.! I think the temperature was 29 - 30 degrees while we were on the water. But John got his 24th straight month in and we both experienced something new... ice forming on our paddles, paddle leashes, and other gear! We ended up paddling for about an 1 hour, 20 minutes and covered about 3.5 miles. Some pictures below.
Posted by Patrick Wellner at 4:49 PM 4 comments: