Roger Debates, Matt Story, and David Mays met at my house on Friday evening for our next section of the Missouri River. Our plan was to go from the highway 212 bridge to the Oahe Dam over two days. On Saturday morning, we met a friend of mine from the running club, Art Smith, at the west shore boat ramp. He rode up to highway 212 with us and drove Roger's truck and trailer back to west shore. This way we didn't have to shuttle ourselves after two long days on the water. 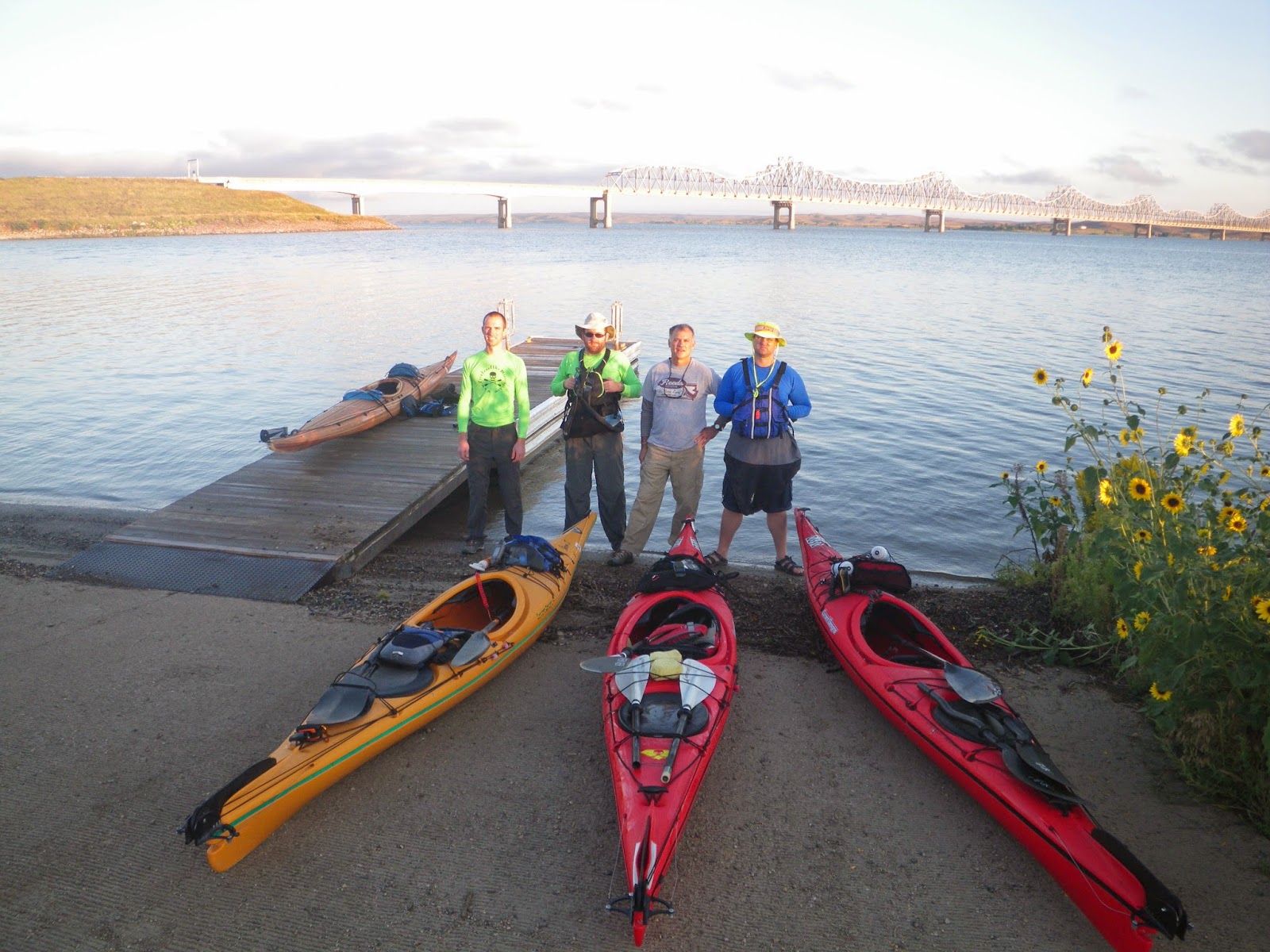 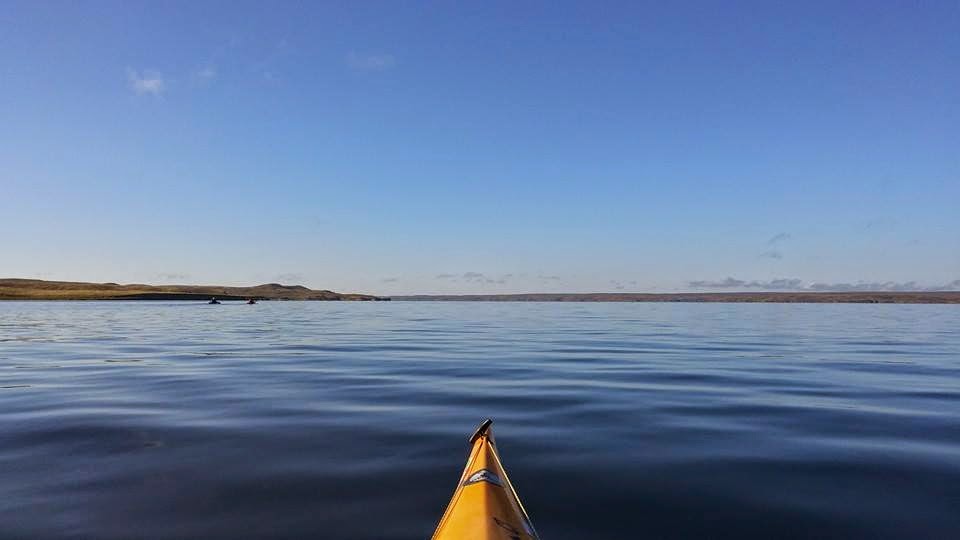 The day started out great. The water was glass early on and as the day progressed it got a little choppy, but nothing for us to worry about. I think we only took three short breaks during the day. We had two large crossings to shave distance on Oahe and one smaller crossing across a bay on the west shoreline.

As we came around the end of the little bend peninsula, we were met with fierce headwinds and 4-5 foot waves. Our progress was severely impeded; our speed at times dropped below 1 mph. We had been averaging around 4 mph for our moving average earlier.

As the sun was getting close to setting, we started to get nervous about our progress. We ducked into a small bay to try to get our bearings and even considered camping there. Matt even had to do a roll when the waves knocked him over there. But, we pushed on, hoping to camp near a road.

We did not make it to the little bend campground, but did get to the boat ramp. Which turned out to have better wind protection anyway.

We camped in a small grove of trees and were feeling pretty good by the time we had dry clothes on and had some hot food in us. Freeze dried meals never tasted so good. We decided to wait until morning to see if we should continue on or bail on the 30 miles to the dam. 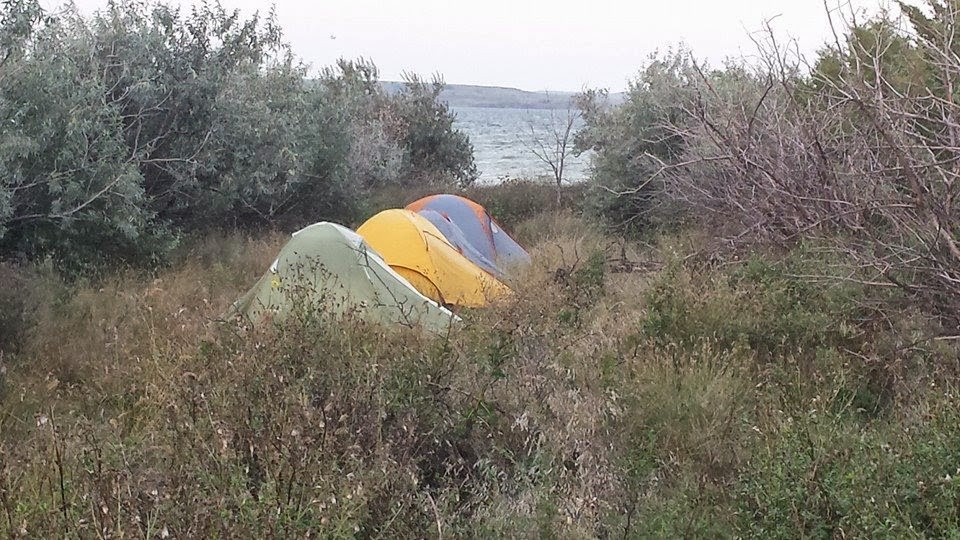 By Sunday morning, the wind had not died down. So, I texted few friends in Pierre looking for a ride to retrieve Roger's truck. Luckily, Jesse Roebuck responded positively. While we waited for him, we made up some freeze dried eggs and bacon, added some spam to it, and wrapped the mixture in tortillas. Delicious!

The wind did die down some by mid day, but that would not have given us enough time to cover 30 miles. So, we will have to cover it on our next trip before moving north on Oahe.

We decided that had the SD Kayak Challenge held a race up here (this was the original idea for a route), the drop rate would have been astronomical. Rec. boats would not have fared well in the waves we faced.

I also got to experiment with my new spot gen3 device/unit. It worked great. Here are the points it recorded in tracking mode (every 10 minutes).

Back on July 19, I took part in the newest ultra distance kayak race on the Missouri River in South Dakota, Fort To Field 50 Paddle Battler. Jarett Bies, co-founder of the SD Kayak Challenge and founder of the Yankton Riverboat Days Kayak Run created it as a race to show off the river between the Fort Randall Dam and Springfield, SD.

Racers assembled at the Randall Creek Recreation Area on Friday afternoon to drop off boats and other gear before heading down to the Springfield Recreation Area to drop off vehicles and catch the shuttle back. We had racers from all over, South Dakota to Netherlands! Recreation paddlers and seasoned veteran racers like Joe Zellner. Boats ranged from 8' to 20'+. Racers and support crew either camped or stayed in motels in Pickstown. The Wagner Chamber of Commerce provided our supper on Friday night, burgers, brats, and what not.

The race was an on water start initiated by the firing of a cannon. The cannon was also fired a couple of times earlier to warn racers of how much time remained before the start. What a great alarm clock! The weather was beautiful for the race. Relatively calm winds for SoDak and the temps probably reached the 90s for a high. I gave a big surge at the start to try to hang with some of the elite paddlers and it gave me a brief opportunity to have the lead. :-) 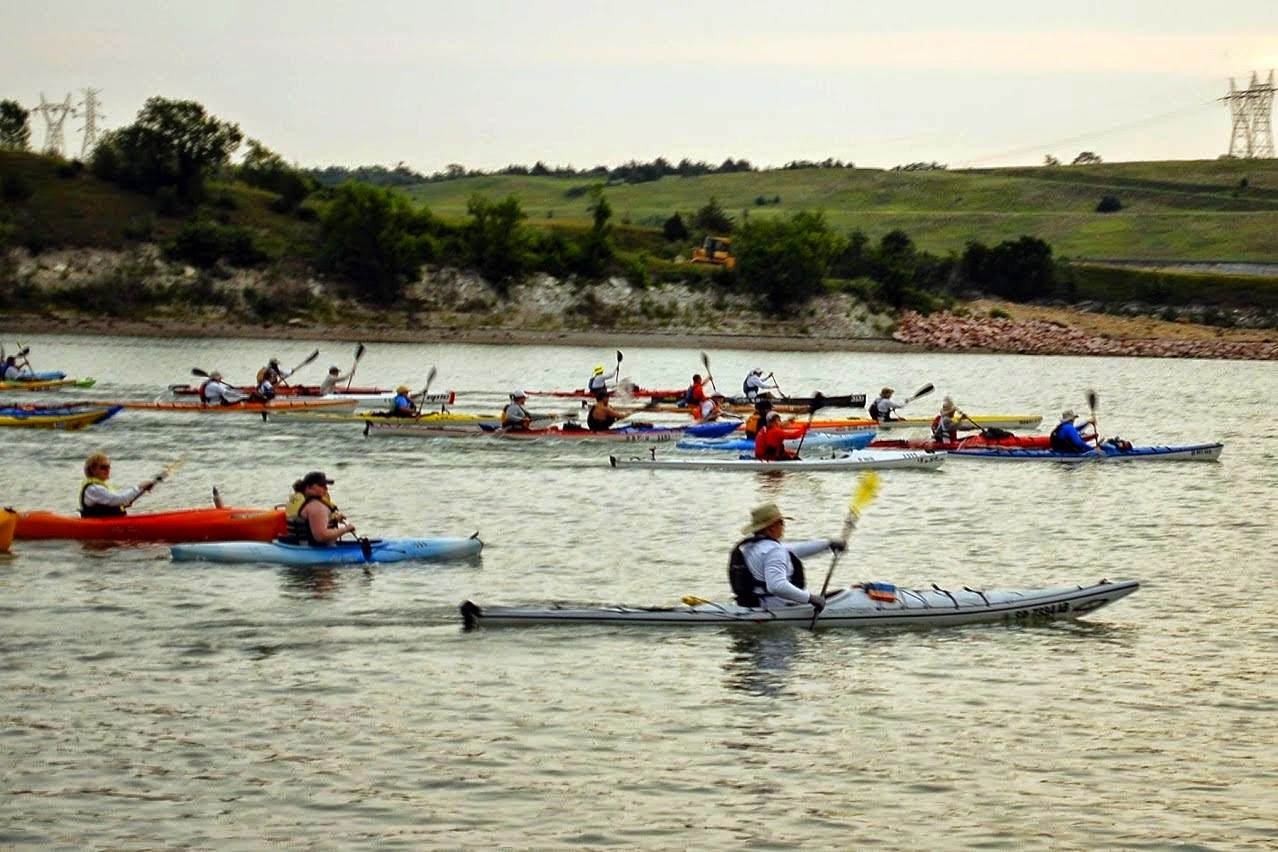 The race went fine for me. I did not get out of the boat at all and kept JB Halter in sight past CP1 which is about 18 miles from the start. As I passed the third and last check point at Running Water, I heard that only 6 paddlers were a head of me. But, when I reached the finish in Springfield, I was asked if I saw Zach Wipf. Apparently, he got mixed up and missed the chute to Springfield. He must have paddled along the Nebraska shore all the way to Lake Lewis and Clark. He had been in 2nd place all day, but finished in the 20s. It shows the importance of studying the river in this area. So, I managed to finish 6th overall, 7 hours and 29 minutes.

The remainder of the afternoon and evening were spent helping racers out, enjoying a delicous post race meal and refreshments provided to us, and BSing about the race and racing in general. Overall winner, Joe Zellner was great for sharing advice and tips. A group of us then went to get a second supper at a local bar and grill before heading to our campsite for the night.

Overall, it was a great race that I will try to fit into my schedule every year.

Results can be found here.
Posted by Patrick Wellner at 9:54 AM 3 comments:

As has been apparent this year, I am a bit burnt out on blogging. I have three trips worth posting that I have not been motivated to post anything about.


Whether or I ever put a post up for any of these is yet to be seen, but I just extended an invitation to fellow Pierre paddler, Matt Hicks to join the blog as an author. Others may be welcome too as time moves along.
Posted by Patrick Wellner at 9:27 AM No comments: