Breaking In A New Boat

Last weekend, while Matt, Cory, and I were hiking and camping in a blizzard, Roger Debates was up in the twin cities getting a new boat from Midwest Mountaineering. He ended up with a CD Storm GT. Well, this past week he decided he needed to break it in on the Missouri River. He found a spot on aerial photos that we could put in at just upstream of Chamberlain and the plan was to take out at the Dude Ranch access downstream of Oacoma, The trip would be about 10 miles. Obviously, Matt and I were up for helping Roger break in the new boat.

Saturday was beautiful. 60+ degrees and light wind. We met in Oacoma and BSed a little while waiting to see if anyone took us up on the invite we left on the SDCKA Facebook page. Roger's boat was still pristine despite having been paddled nearly a mile on an east river lake. We then headed to the Dude Ranch to drop off my pickup.

First, we went upstream from Chamberlain to look for a put in. We easily found the spot Roger had picked out off of Google Maps. But, the water was low, creating a mud flat we would have to cross. Next, we went upstream from Oacoma looking for better access. We found one spot, where we had seen people fishing at on our cruise to Chamberlain. But, it also had a mud flat between us and the river. We scouted it a little and after getting a bit muddy and Roger losing a shoe (I was able to dig it out for him) we decided to just put in at the Cedar Shores boat ramp. Luckily, this was the most adventurous event of the day.

We launched from Cedar Shores and made our way downstream. It was a perfect day to be on the water. We stopped near the railroad bridge to strip off some of our unnecessary layers. As we approached the Dude Ranch, there were numerous geese that would get spooked and fly up, but only land a little ways ahead. This probably happened at least 3 or 4 times.
We ended up covering 6.5 miles and succeeded in breaking in Roger's boat. He ended up with a few new scratches and plenty of mud on the boat!

Posted by Patrick Wellner at 9:22 AM 3 comments:

Blizzard In The Badlands

Cory Diedrich, Matt Story, and I have been planning this past weekend for over a year, so we weren't about to let a little blizzard stop us. We have been talking about exploring the south unit of the Badlands National Park for over a year since we read a New York Times article about it. We emailed the National  Park Service, called adjacent landowners, and studied aerial photos and topographic maps. Information about the area was rare, but we had two possibilities for routes into the Palmer Creek Unit.

On Friday, we met in Vivian, SD where we left my pickup and loaded my gear into Matt's pickup and headed towards the main entrance and visitor center of the Badlands National Park. We camped in the main campground the first night, so we could stop at the visitor center on Saturday morning. We gained a little more information by asking questions in-person and face-to-face. The way we would get in was a dirt road that went east from the White River (South Unit) Visitor Center. We also decided that  with the approaching blizzard, we would go down and check it out and return to Sage Creek before it hit. 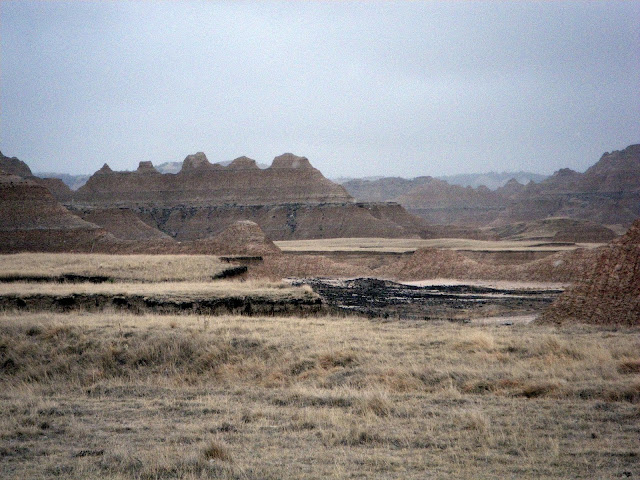 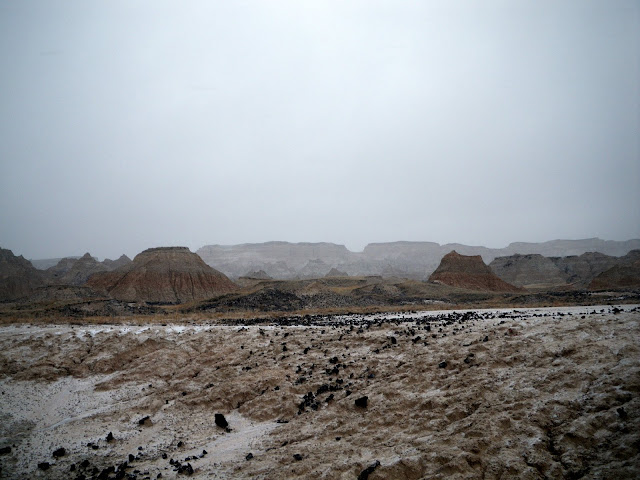 The blizzard began to hit as we were hiking in the Palmer Creek Unit. Hiking back to the truck was made difficult by sleet/snow stinging our faces. We probably left a little later than we should have. The road back up to Scenic, SD was getting slick. Just past Scenic, we turned onto a gravel road that wasn't near as bad, but visibility was dropping significantly. Not too long later we arrived at the Sage Creek primitive campground and trail head. The campground was getting hit by the wind pretty hard, so we grabbed our packs and headed into the wilderness area. After about 0.2 miles we found lower ground also protected by trees. We setup camp and had some hot food (freeze dried meals) before diving into our sleeping bags.
During the night, the low temperature was -2 degrees and the low windchill was -8 degrees. We all stayed warm enough, but we spent about 14 hours in our sleeping bags before it was light and warm enough to crawl out. We made the decision on Sunday morning to do a little day hiking to warm up and then return to tear camp down and head for home. We could handle the overnight temps, but the time spent in the sleeping bags was unbearably boring. 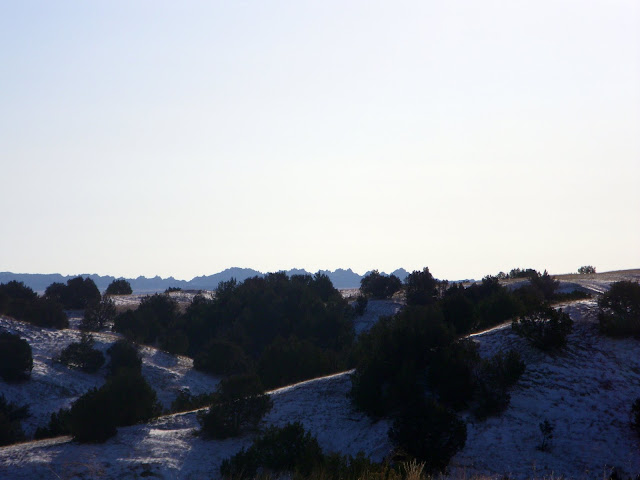 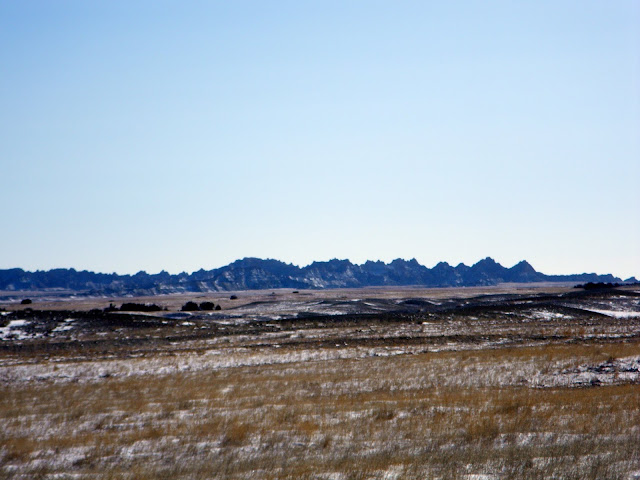 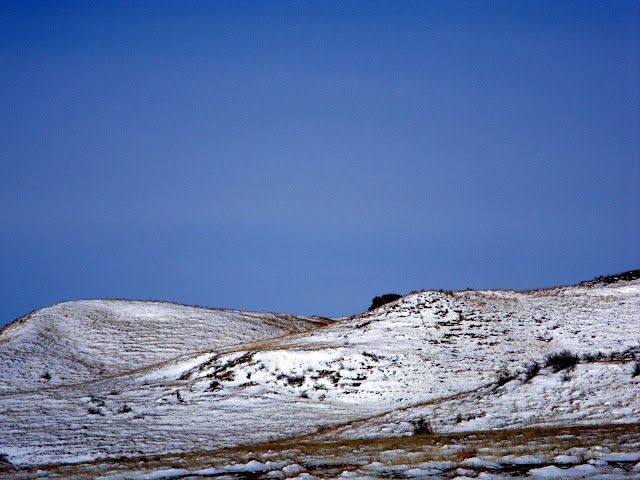 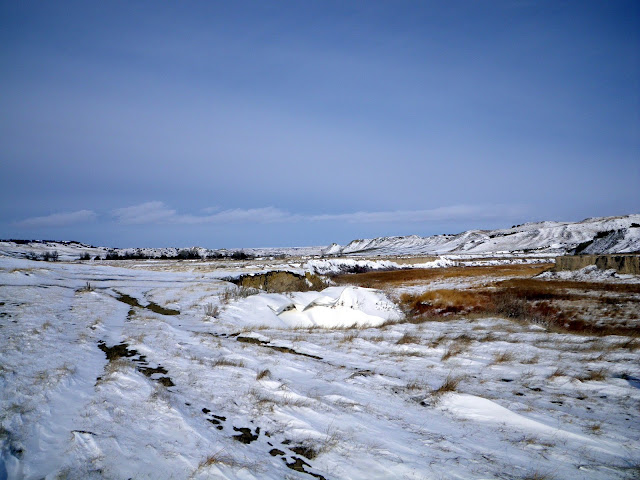 We saw much wildlife during our hike on Sunday. Including, numerous bison, coyotes, deer, and antelope. There was one coyote that, afterwards, we debated whether it was a coyote or wolf. It seemed quite large and dark colored for a coyote and we have heard of some wolves reintroducing themselves into South Dakota. We also saw two large bucks; the second being VERY LARGE by all of our accounts. And, he is safe as long as he stays in the Sage Creek area.
Posted by Patrick Wellner at 7:17 AM 1 comment: