Yesterday, I drove to Mitchell for the most recent SDCA event. We were paddling the James River. It turned out to be a terrific time spent paddling. As one paddler put: good day, good times, good company.

The total paddle turned out to be approximately 11 miles. My gps read 11.2 (including a brief jaunt up a tributary and John's read 11 flat. 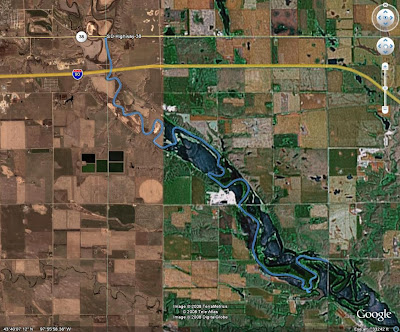 Since the google earth image is not of great quality, I'll add a map with the route from Map Source (Garmin program). 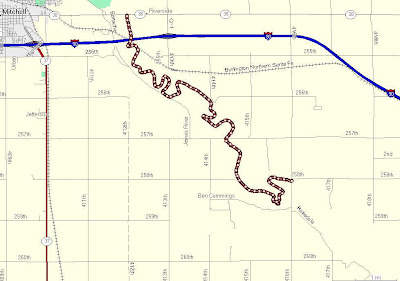 Not too much wildlife was seen, though I caught a glimpse of either an eagle or a vulture. I didn't get a very good look so I can't be certain. Plenty of cattle along the way though. Water levels were good for the whole trip. There were occasional spots with a few rocks but nothing that could be thought of as problematic.

What I really enjoy about the SDCA trips is meeting fellow paddlers and chatting/BSing along the route. I made at least one new acquaintance, Ryan from Sioux Falls. And I let a few folks know about my plan to kayak/camp along the Missouri River in October (more details coming in a later post). Jay Heath also asked me to give a presentation at the SDCA conference in January, which I replied I was willing. Should be fun. As per every SDCA event, I had someone ask about my rack, which, as always, I enjoyed discussing.

It was a great paddle and very well organized (Thanks Jarett). I would definitely recommend this trip to others. I believe it was close to half way between those in the Brookings area or Vermilion area and Pierre. Making it a nice place to maximize attendance... well except distance doesn't to limit Pierre paddlers as much... I guess we're just crazy ;)

A (not so quick) slide show of the pictures I took on the trip (with comments):
FYI, In case no one has noticed this before, clicking on any of my slide shows will take you to the picasa web album

Posted by Patrick Wellner at 5:42 AM