When I left Pierre on Friday afternoon to meet Roger and Matt at West Bend, the forecast was for wind in the teens to 20 mph. The forecast for Sunday made the second leg of the weekend look iffy, but we figured to decide on that on Sunday morning.

The little bit of wind on Friday died down for the night and the sky was clear. We woke up this scene on Saturday morning: 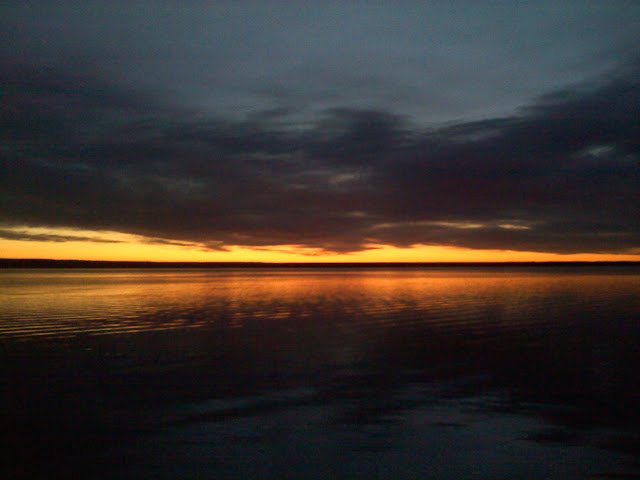 After loading our gear and boats on my pickup, we headed for Fort George. The scene as we prepared to launch was awesome; glassy water! 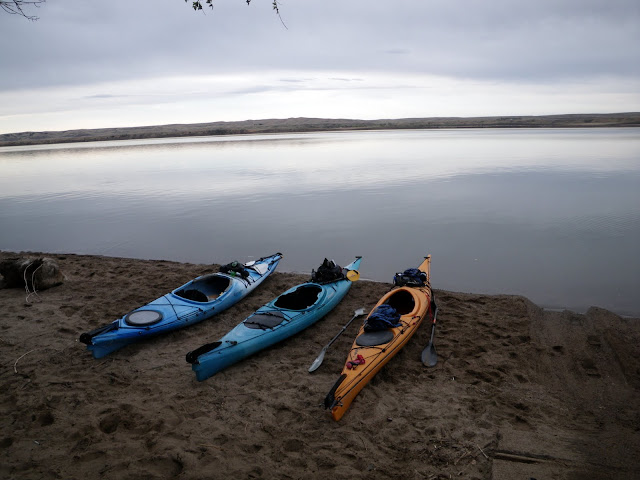 We departed Ft George a little after 8 AM. Thanks to the calm conditions the paddling was easy; though a little slow due to very little current. 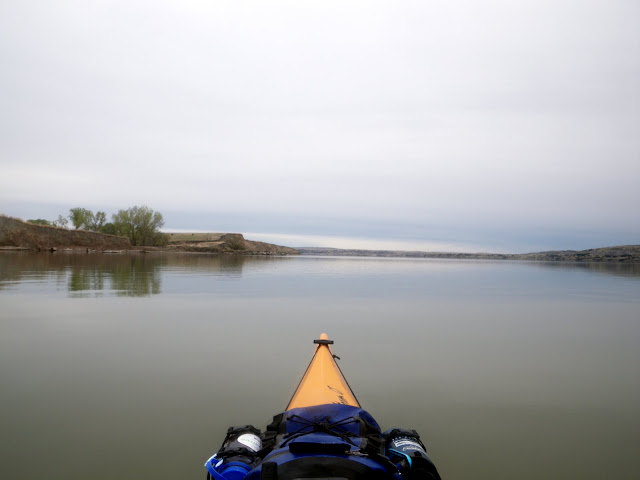 Throughout the trip, we had to be aware of numerous stumps and trees in the river. I was a little surprised that last summer's flooding didn't wash them away. 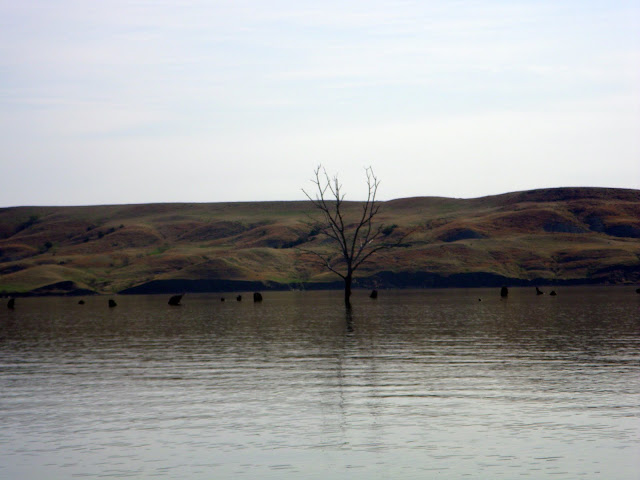 From mile 20 to 25, the wind began to pick up and clouds filled the sky. After 25 miles or so, it truly became nasty. Looking at NOAA's history, it seems we were facing 22 mph wind with 35 mph gusts which grew to 28 mph wind with 39 mph gusts by the time we finished. The worst part was that we were facing a headwind as we pushed to get around a bend that would signal the homestretch to West Bend. The wind sweeping up the mile+ wide river was creating large waves. We also began to get sporadic sprinkles and rain, which became a torrential downpour by the end.

As we pushed around the bend, we got some help from the wind, but down the homestretch we received the wind from the side. The waves were trying to push us into shore. This side wave action gave all three of us some close calls, but, thankfully, no swimmers.

The homestretch is about a 4-6 mile section, depending on where/how you measure. Early into it, while battling the waves/wind and downpour, we began to hear thunder and see lightening. The trouble was finding a suitable place to get off the water. We took the time to pull out lights, since it was getting dark and fiddled with our GPSs. It appeared we just had 3-4 miles at that point. Since we hadn't heard any thunder or saw any lightening since pulling ashore, we decided to push for West Bend and keep near the shore.
Even with headlamps, we had difficulty seeing our way through the downpour, so we paddled a little further out to avoid downed trees along the shoreline. We were continuing to battle waves crashing into our sides; trying to shove use into the shore.

Around 9:30 PM, we finally approached a light that turned out to be a cabin near our campsite. As we beached the kayaks and hopped out, a wave came crashing in and swamped both Roger's and my boats. We quickly lifted the boats from the beach to the grassy ledge before another wave crashed in. We carried the boats back to our campsite and secured everything. We then dove into our tents to change into dry clothes and climb into our sleeping bags. My GPS recorded that we had covered 36.5 miles on the day.

As can be guessed, we chose not to paddle on Sunday. We woke up to more rain and 37 mph wind with 51 mph gusts. This is what the river looked like this morning:

The quote below my blog's title is quite fitting for this weekend: “Spend as much time as possible on mountains, in small boats, or otherwise out in the weather; if you never get wet, cold, exhausted or scared, you won’t properly appreciate being dry, warm, rested and safe.”
Posted by Pat Wellner at 2:14 PM